In the above PDF, there is a section of Grim Gears. Specifically, the merchant's chapter. Instead of a list of possible gears and weapons, I decided to use a handful of example NPCs, and giving rules to generate their shops. This can give a sense of specificness that I think can be useful. Generating a weapons shop means that the shop has a finite amount of resources, and players will have to engage with the NPC, rather than shopping out of the book. There is nothing wrong with shopping out of the book, it speeds things up. So, these NPCs can be used as a list to purchase from.

The NPCs presented are examples, Mimic could be any dark knowledge trader, and Bran and Don can be any weaponsmith.

Popular posts from this blog

The GOOD Boy A horror monster You cannot believe. Here, of all places, is your pal. Your childhood pet and best friend for almost a decade. It's tail wags, just as it used to. But, something is off... Its movements lie just within the uncanny valley. A stench of rotting meat and blood emanates from it. And, are those strings? This monster is not meant for any particular game, rather it is just a drawing I made and an idea. So, in place of stats, I will present ideas for what its stats should be on par with. I believe that your monster's stats do not matter too much in the grand scheme of things. It's not the HP or attacks that players remember. The good boy is a cruel monster indeed. Its a puppet for those that wish to spread betrayal and horror through the world. A shapeshifter, of a sort. It takes the form of whatever childhood pet you hold most dear. A dog, cat, perhaps even a doll. Multiple people might see different pets. Which can quickly give away the
Read more 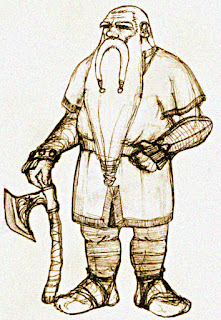 See end of blog for details about this blog. The Dwarf We are all familiar with dwarves. Heavy drinkers, great warriors, tough, sturdy, honorable (to a fault) and vertically challenged (But not so much it matters). I love dwarves. I love their great dwarven cities, their industry, and their general aesthetic. What I do not love, is that they are just humans, but shorter and with longer beards. Now, don't get me wrong, I think that making them humanish makes them easier to understand and use. Well, fuck that. Let's make them weird. Dwarves of Living Stone This idea is not wholly mine, but I did expand it greatly. My buddy mentioned something along these lines, "Maybe dwarves craft so much so they can perfect their final creation. Another dwarf."  This was the spark of inspiration for these stone dwarves.  Here is the core idea. Somewhere, deep in the mountains, there is a stone with magical properties. If a statue is carved from it, it becomes a living
Read more